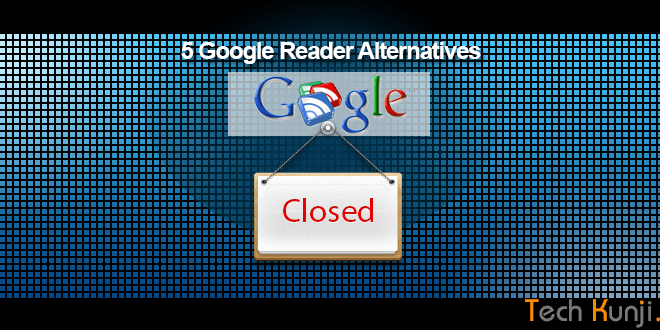 Google on 13th March announced that they are Powering Down Google Reader on July 1, 2013. To ensure a smooth transition, they are providing a three-month sunset period so users have sufficient time to find an alternative feed-reading solution. I am a Google Reader user and wanted to migrate to a new reader without losing my subscription list. First, I searched  extensions on Chrome Web Store and found a couple of them. This list includes alternatives that I found and also which my friends recommended.

These sites are ranked in no particular order.

Netvibes has a great looking dashboard, loads of widgets and more functionality than any other reader out there. Most of the widgets are free, but some of them cost money. Importing your Reader OPML file into Netvibes is as simple as clicking “Add content” and then “Import.” Recommended if you all those fancy stuffs around your reader, I like to simple and clean so didn't choose Netvibes.

Newsblur resembles to Google Reader. It is another good alternative to consider. A unique feature Newsblur got is it combines RSS feeds and headers with actual websites. If you are not getting what I am talking try it by yourself as Newsblur gives us an option to try their service before signing up. They have also added an option to import from Google Reader on the homepage.

Reeder is a reader for Apple devices like iPhone, Mac, etc. This was recommended by one of my friend who is an Apple fan boy. I included this in the list because of its sleek design and great functionality it gives. One best feature I liked is that it lets you download articles for reading offline. If it was free most of my friends would have used it.

Yes, guys at Digg are making a reader. I am definitely  moving to Digg Reader when it's released (Well, if they make it better and I am pretty sure they will). Digg announced this on their blog and lot of them are already excited about this. Hope they release it before July 1, 2013. They had plans in making a reader way back and it's now in their top list as Google made their announcement.

Try all of them by yourself and choose which suits your requirements.

Lot of RSS reader websites faced huge traffic after Google's announcement. Some of them even increased hardware support to manage more traffic. Newsblur added many new servers and the backend is being rewritten to support 10X growth in a single week.

Let me know if you have found some awesome reader, I would love to try them out as I haven't found a service which will give me back my Google Reader experience.